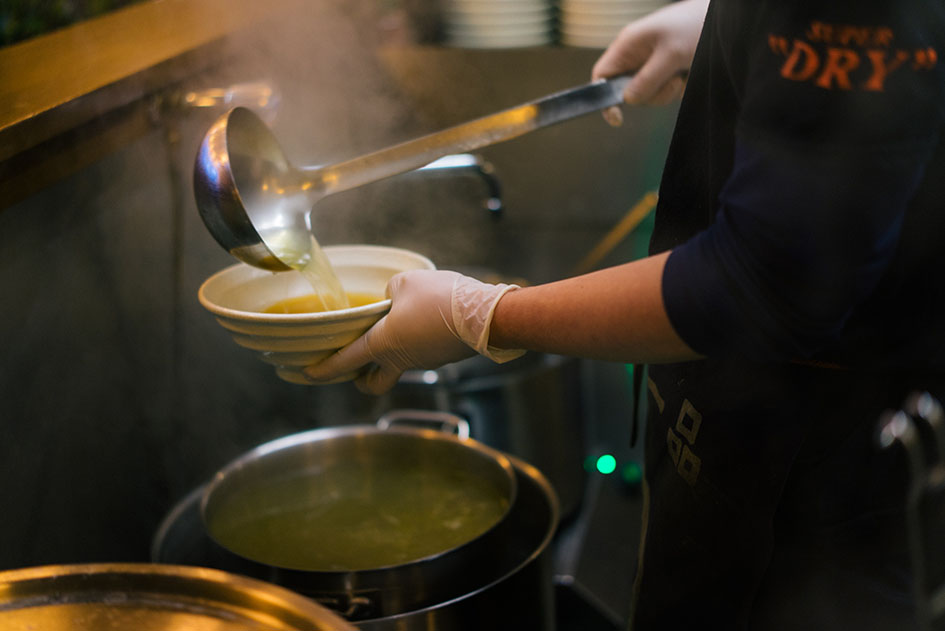 Berlin in a slurp – Ramen-shops we love

Before I went to Japan, I had tried exactly one Ramen shop before in Germany. After the first Bowl in Japan, I was in love with this simple, variable dish in which the chefs put so much dedication. My goal was to eat 100 different bowls in the eight months I stayed there; I ended with 112. Back in Germany, my lust to eat Ramen hasn’t stopped. Lucky for me, Goodpatch has the same admiration for Japanese food, as the company initially started in Tokyo. You may have spotted the small Ramen emoji that leads you to the Japanese website. We've chosen it for a reason. But also the location of our second office in the heart of Berlin doesn’t leave you hanging. There are several Ramen shops in the German capital. Here you can read about the ones I liked – in a non-particular order.

But before we start, a little bit of history has to be taught about probably my favorite dish.

From China to Japan and the world: Ramen (ラーメン) noodles originally were introduced to Japan by Chinese Immigrants in the late 19th century in Yokohama, Chinatown near Tokyo.

In Japan, Ramen is seen as fast-food and served in small so-called Ramen-yas that only specialise in cooking Ramen. There are more than 200.000 Ramen shops all over Japan; almost 10.000 are estimated to be in Tokyo. After waiting in line for one of the few seats inside, you order your dish at a ticket vending machine (often all in Japanese, tip: press the upper left button to get the recommended bowl). The process of eating should not take longer than ten minutes Japanese Ramen master say, as the noodles otherwise lose their consistency.

Enough said about Ramen in Japan to make you hungry for a good bowl of Ramen in Berlin.

I was actually on the hunt for another Ramen-ya but had to find out that it isn’t in service anymore. Lucky for me, because that is how I found Iimori Ramen.

Opened in January 2020 this small shop lies in a side street of the Alte Schönhauserstraße in Mitte. Next to a tea shop and a Japanese Haircutter, the Mulackstraße almost gives you a glimpse of a feeling like you’re in Japan. So does the interior with its minimalistic design containing Stones and wood with a few bonsai trees.

Now to the most crucial part: the Ramen bowls. Iimori serves Tonkotsu-, Miso-, Curry- or Tantan-Ramen. They also have a summer menu with cold variants of the classics like a Gyokai-Tsukemen, cold noodles that you dip into an extra served fish-based broth.

As I went there in October, I chose a hot bowl and tried the Tantan-Ramen. The Tartan-Ramen typically contains a spicy broth with thin noodles and minced pork and varying toppings. Iimoris Tantan came with a half-boiled seasoned egg (which was half-boiled, I approve), baby spinach, scallions and corn. It was delicious, and the noodles had the right consistency. The only thing for me it could’ve been spicier. Their unique bowl is the soy sauced based Shoyu Ramen that comes with a scallop and prawn.

Relatively high price segment, but service and taste justify that.

Hako am Boxi is located – the name already tells it – in Boxhagener Straße and is a small shop where you have to count in waiting in line during rush hours. The shop opened in 2017 and is serving picture-perfect Ramen Bowls.

The menu is minimalistic but serves all the classics like pork fat based Tonkotsuramen, Shoyu- or Tantanramen. They also started to do Tsukemen, the dipping alternative of Ramen. Order a tea or some side dishes to accompany the bowl.

I tried the Tonkotsu, and it was on point. Not as heavy as Tonkotsu in Japan, but probably the closest to what you can ask of German customers. I liked it. The egg was also a big plus. The pork belly was well seasoned, and ginger/scallions round up the bowl perfectly. I’m not too fond of wood ear mushrooms that were also part of the toppings, but all in all this bowl was good.

Price/performance ratio is also really good with most of the bowls on the menu for around 10€. Don’t mix up the other existing Hako Ramen shops with the Boxi one. The one at Boxhagener Straße is the real deal!

Coccolo Ramen was highly recommended to me, and of course, I had to check it out. They recently moved the Kreuzberg location to Graefestraße. On the corner, you can already see the people lining up for a bowl of hot broth and noodles.

The menu offers eight different Ramen with various toppings. Expect a modern interpretation of the Ramen classics. (Never had Shio Ramen with Corn before). I kind of like that approach towards new experiments. A real downer was the egg though, that was hard-boiled and not seasoned.

As I said, I ate the Shio Ramen, with an unusual thick but tasty broth. The toppings were as well unique, but I already mentioned I liked the experimental approach. Corn, Chicken, and Bonito flakes combined with the thin noodles came through very tasty.

The shop itself is quite big and well frequented. Prices are mediocre.

Buya, just a 5-minute walk away from the Goodpatch office, is hidden in a backyard but you can find it because of the big ラーメン sign.

After their first try as a pop-up shop, the American Ramen shop is back in Kreuzberg, Berlin. The interior is very fancy and lights with an open kitchen in the middle of the room.

Next to several Izakaya snacks like Gyoza or Edamame, they sell six types of Ramen. Not only the usual suspects but also new creations like a cold Ramen salad.

I tried the Crispy Duck Ramen, and yes that duck was indeed crispy. Coming with grilled tomato, egg, and pak choi, this bowl was perfect and something new.

Takumi can be translated to “Meister” in German or “artisan” in English. Founded in 2007 it was one of the first Ramen brands brought to Germany. What makes them famous or authentic are the noodles, that they import from Nishiyama Seimen a noodle factory in Sapporo, Japan.

With two shops in Berlin, I had the agony of choice, where to go first. I tried both shops, and if you want the bigger menu, I recommend the shop in Mitte. There, they also serve a Ramen with Noukou Tori Shio, a Ramen with creamy chicken broth with rounded chicken and a half-boiled egg.

So smooth and tender that you have to try it yourself. But be aware that with good Ramen come long lines. A waiting time of more than 30 minutes should be calculated.

Takumi serves authentic Ramen with quite a significant portion. It’s the big player you should not miss, but don’t forget the smaller shops in its’ shadow.

That’s it. You now have five locations to try Ramen in Berlin. All the shops mentioned offering a vegetarian or vegan option. So you have a lot of possibilities to choose from. Itadakimasu!

Request our whitepapers
Thank you! Your submission has been received! We will get back to you soon.
Oops! Something went wrong while submitting the form.